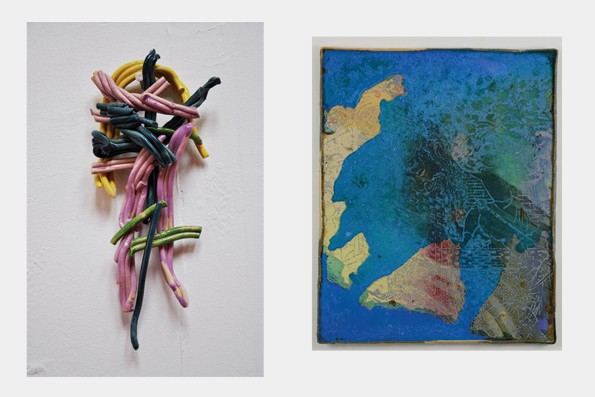 Jacqui Hallum casually transcribes sections of a medieval woodcut, greatly enlarged. Dürer’s image ‘Knight and Landsknecht’ (1497) is anachronistically re-cast as Don Quixote and Sancho Panza, and it is the duality of these two protagonists as they navigate the world experientially and imaginatively that provides a metaphor for the relationships between the areas of colour information that interrupt, animate and camouflage the illustration fragment. Pigmented stains re-occur in Tamara Van San’s new sculpture, but here they have become 3-dimensional forms that inhabit space rather than ingress the fabric of an object or a surface. “[I want] to make colour stains like they are lying in a hammock. [Then] maybe put them on their side, or build a wall…” Van San’s desire to make solid something as insubstantial as a stain requires a protracted and experimental negotiation with her materials, which must be carefully trained to behave at the edges of their intended function or purpose.